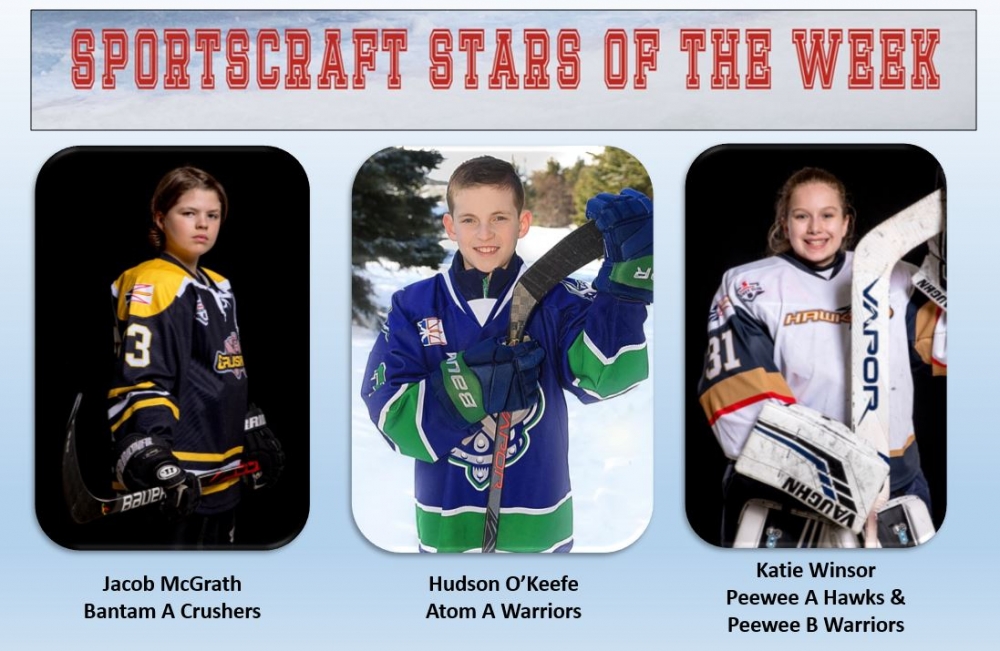 Week 2 of Scotiabank DJHL play-off action saw our Atom A
finalists decided, the Blades advance to the league championship in Bantam B,
and the BNS Jackals qualify for the Peewee A final. Elsewhere, semi-final and
preliminary round play intensified. In Week #2 some players truly rose to the
occasion. Here are the Sportscraft Stars of Week #2:

First Star goes to Jacob McGrath, forward with the BNS
Crushers. Jacobâ€™s team fell to the BNS Generals twice in best of five
semi-final Bantam A play this past week, but his constant driving to the net
and strong wrist shot paid dividend for the first year Bantam. Jacob scored all
four of the Crushers goals in both games, including a hat trick in the second
match.

Second Star is awarded to Hudson Oâ€™Keefe, first-year forward
with the Paradise Atom A Warriors. Hudson was a force at both ends of the ice
in semi-final action against a strong Mount Pearl Blades team. He opened the
scoring in game one with a highlight reel goal that was only topped when he
scored another highlight reel goal in game two, while shorthanded no less, that
energized his Warriors teammates. The 2-way player also killed penalties and
back-checked relentlessly, making him an invaluable asset to the Warriors.

Third Star goes to Katie Winsor, goalie with the BNS Hawks
and Paradise Peewee B Warriors. On one-hour notice, Katie filled in for the
Hawks in their Monday night semi-final and made sure the scorekeeper could keep
his hands in his pockets, delivering a shut-out performance in a goalie duel
against Ben Fleming and the Cobras to even the series. The next night, Katie
earned Player of the Game honors for her Paradise Warriors team, keeping the
game close in a 3-1 loss.

Honorable mention goes to Nathan Nolan, defenseman with the
BNS Thrashers Bantam A squad. Nathanâ€™s play in all three zones stood out for
the Thrashers in their tight semi-final series split against the BNS Guardians.
Nathanâ€™s work effort is matched by how respectful he is both on and off the
ice, things the Thrashers coaching staff truly appreciate. Stats are only one
measure of a Star performance and this versatile D-Man is a prime example.

Honorable mention also goes to Jack Carter of the Paradise
Warriors Atom B, who proved why he wears the A on his jersey. Jack scored two
goals in a do or die game two against the Renegades on the way to a 4-1
victory. Besides his snipes and an assist in game 1, Jack's strong two-way play
stood out, especially on the back-check.

Winners can pick up their Sportscraft gift certificates at
the store on Ropewalk Lane. Congrats!