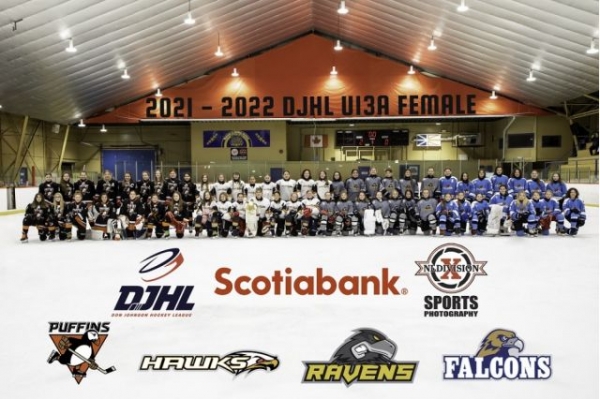 This year's edition of the Scotiabank Don Johnson Hockey League is a special one thanks to the newly-formed Girls U13 A Pooled Division. With 8 games each under their belts, the four team set-up, featuring the Puffins, Ravens, Falcons, and Hawks, continues to draw excellent attendance from players and fans. Most games are close contests and the level of competition is evident to everyone. But where else can you pop into a dressing room to tell a team the ice is ready and be met with disco lights dancing on the dark walls or walk by another dressing room and hear the chorus from an Adele hit being sung by the players?

Pooled girls hockey has never existed in the DJHL. So when we gathered all four teams on the ice on Sunday night at DF Barnes Arena between games for one gigantic photo opportunity, a special moment was being captured by our League Photographer Geoff Hynes. These girls will always be known as the first to play in a division of their own in the DJHL. Nothing can ever take that away from them.

Thank you to Tracy Hatcher, Maria Penney and Denise Fagan of the HNL Female Council for your vision and leadership. Thank you to Scotiabank for immediately seeing the merit of our expansion plan and providing extra financial sposnorship. Thank you also to the many staff volunteers and parents for being the backbone of something special. But thank you most of all to the players for coming together as one to prove girls pooled hockey belongs in the DJHL.