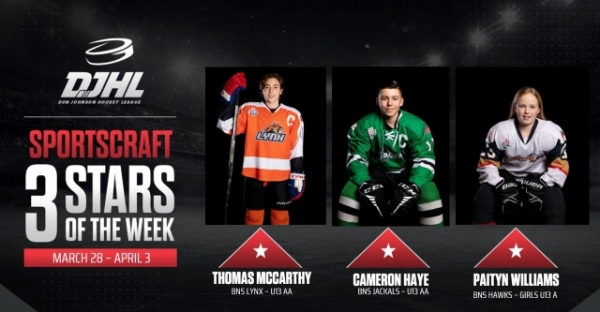 With Week 1 of the Scotiabank DJHL play-offs in the books, it鈥檚 time to announce the Sportscraft Stars of the Week. In a week that saw our first team eliminated from play-off contention and our sudden victory format introduced, skill, intensity and excitement could be found everywhere.

First Sportscraft Star goes to Thomas McCarthy of the BNS Lynx. Captain McCarthy鈥檚 constant driving to the net and quick release earned him a four goal performance on the night against the Jackals in his team 5-3 semi-final opener victory at Jack Byrne Arena.

Second Sportscraft Star goes to Cameron Haye of the BNS Jackals. The Jackals captain led his team to a 5-1 victory over the BNS Cobras to advance the boys in green to the U13 AA semi-final round. The shifty, hard-working Haye scored an impressive hat trick and set up another goal in the sudden victory series.

Third Sportscraft Star is presented to Paityn Williams of the U13 A Girls Hawks. Paityn put in a dynamo effort and scored two goals in their team鈥檚 3-0 semi-final win over the Ravens at DF Barnes Arena on Sunday night. Williams scored the first from her knees in the slot and the second on an exciting breakaway deke.