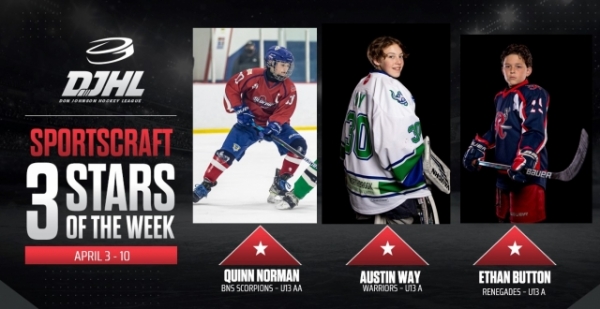 Week 2 of the Scotiabank DJHL play-offs featured all nine divisions in action, so there were lots to consider for the Sportscraft Stars of the Week. In the end, we selected a defenseman, a goalie and a forward for their accomplishments.

First Sportscraft Star goes to Quinn Norman, defenseman with BNS U13 AA Scorpions. Quinn was a dominant force in Game 2 of his team鈥檚 semi-final against the surging BNS Cobras. The highly skilled rushing D-man contributed a hat trick to his team鈥檚 solid offensive attack and 6-4 victory over the Cobras to stave off elimination. Unfortunately for the Scorpions, the Cobras came back on Saturday evening to win a 3-2 thriller to claim the series.

Second Sportscraft Star goes to goalie Austin Way of the Paradise Warriors U13 A squad, the "Net Ninja." Austin鈥檚 solid performance between the pipes allowed the Warriors to take Round 1 versus the Blades in 2 straight games. Austin鈥檚 coaching staff admire how he is always pumped for game action, and is a leader both on and off the ice. Did we also mention he鈥檚 known to drop a few dance moves?

Third Sportscraft Star is presented to forward Ethan Button of the CBR U13 A Renegades. In game one of his team鈥檚 quarter-final, Ethan tallied a goal and two helpers as his team won 5-2. Coming back from a game 2 shut-out loss, Ethan scored in regulation time in game 3and popped the lone shoot-out goal to clinch the series against the Pacers.

Honorable mention to forward Taylor Bickford of the U13 A Hawks (3 goals in two play-offs wins). Adia Pendergast of the Girls U13 Hawks (two shut-out wins), Raven鈥檚 goalie Ava Gollop for her 20 save performance against the Hawks in a 1-0 Sunday night loss, the U13 AA Cobras goalie tandem of Hunter Hogan and Dace Grouchy who played a key role in their team鈥檚 semi-final upset of the first-place Scorpions and forward Brandon Philpott of the BNS U15 AA Crushers, nominated by his coaches him for his relentless effort and compete level in all three zones in their play-off opener. It鈥檚 not always about the stats.