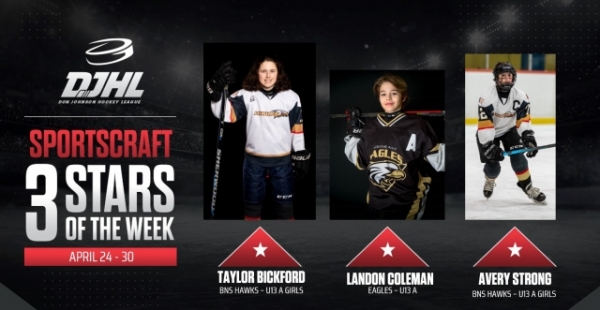 Week 4 of the Scotiabank DJHL play-offs featured 8 divisional titles being declared as our year came to an exhilarating end. Along the way, lots of players gave it their all for their teammates in pursuit of victory in one of the longest seasons on record.

First Sportscraft Star goes to forward Taylor Bickford of the Hawks. Taylor has been a scoring threat all season and in Week 4 of the play-offs it was no different. She collected 3 goals in four low scoring final series games this week and displayed outstanding sportsmanship as her team claimed the first ever DJHL Girls crown.

Second Sportscraft Star goes to forward Landon Coleman of the U13A Eagles who scored a beauty of a shoot-out golden goal for the Northeast squad this week in the third and deciding game over the St. John’s Caps.

Third Sportscraft Star is presented to Defender Avery Strong of the Hawks, who was a standout for the champion Hawks in the deciding match thanks to her breakout passing and constantly busting up the mighty Puffins’ attack.

Our Honorable Mention list is a long for our final week. We acknowledge forward Ryan Drover of the U13A Caps, who was nominated for his scoring heroics in Game 1 of the finals; goalie Hunter Hogan of the Cobras, who impressed a lot of folks with his clutch play in pressure situations for his team in their play-off campaign; Jaxon Sutton of the U11B Paradise Warriors, who scored the winning shootout goal for his team against the Southern Shore Breakers to allow his team to clinch the title in game 3 of the best of three series; and defenseman AJ Simmonds of the gold medal winning Lynx, who was dynamic this week in creating offense and busting up plays in his own end zone for the U13 AA Champs. Since we are in a generous mood, these players can contact the League at djhlnews@gmail.com to claim free DJHL training t-shirts.