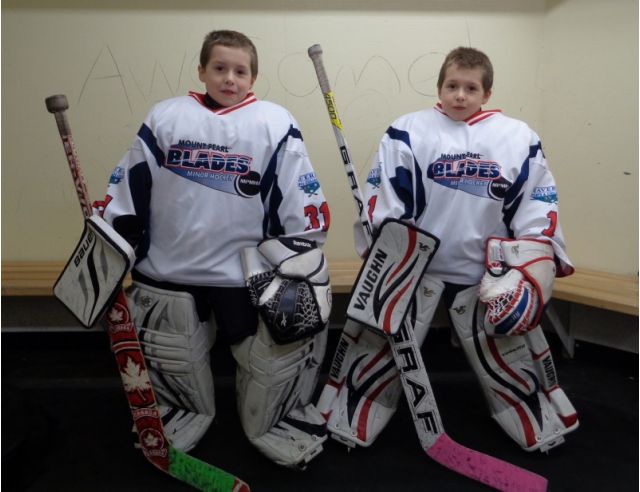 When goalies switch at the half-way point for the Mount Blades in the Avalon Invitational Novice Tournament, fans might do a double-take. "Hey, didn't that goalie just come out of the game?" That's because the Blades line-up will feature the twin Snelgrove brothers in the net, Zack wearing number 31 and Dylan donning number 1. Zack and Dylan have been playing in the Mount Pearl system since age 5 (2012). It seems they must have sneaked on the goalie pads at every opportunity since then. Like all lucky last year Novices, they are looking forward to the big tournament that begins March 10th at Bussey Horwood Arena. This year's classic also features teams from Host Avalon, St. John鈥檚, Northeast, CBR (2 teams), Southern Shore, Corner Brook, Harbour Grace and Bay Arena. They will battle for a spot in the Championship Game slated for Sunday, March 13th. Being a goalie parent takes extra commitment and expense. Goalie parents tend to have their own little fraternity to cope with the pressure the position brings and the sting of fans sometimes forget to filter their words when things go wrong and the puck finds the twine. So, a big salute to Norm Snelgrove for letting both Zack and Dylan play the position they enjoy most. Most would have said, "Oh no!" Norm said, "Why not?" Catch the Snelgrove twins and the Blades, along with seven other skilled Novice teams next week in the tournament that never gets old - the Avalon Novice Invitational. You won't be disappointed!