Week 4 of Play-offs Trims the Pack 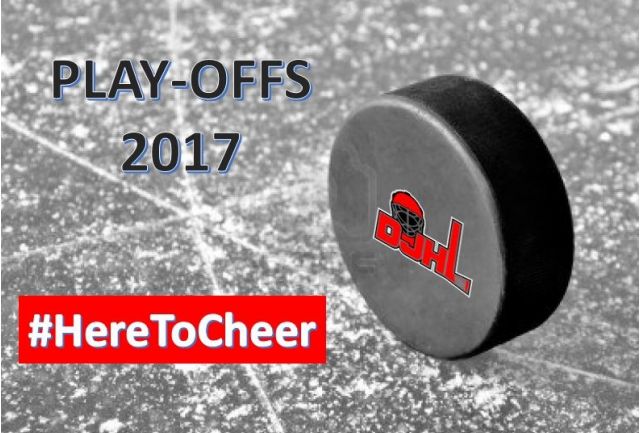 An intense Week 4 in the DJHL came to an end on Sunday. When the dust settled, eight teams were eliminated and four medal match-ups were confirmed. In Atom A, the Celtics-Caps match-up in the gold medal series lived up to expectation as the teams split a pair of games. Celtics won the opener 3-2 on a game winner from Kyle Tucker and the Caps followed with a 2-1 decision on a game winner from Noah Smith. In consolation play, the Renegades pulled out an exciting shoot-out win over the Blades after both teams tied at 3-3 on aggregate at the end of regulation in their two-game total-goal series. They joined the Warriors, who advanced by eliminating the Eagles, to set up a western battle for the Bronze. Atom B, the Pacers ended the Renegades run while the first-place Blades continued on the road to redemption by eliminating the Celtics, who were perhaps the most improved team in the League in the second half of the season. The best of five final saw the Caps push close to the coveted gold thanks to 3-0 and 5-3 victories over the Warriors. In the Peewee A Championship series, the RBC Jackals, led by Evan Carter芒鈧劉s hat trick performance, dominated the RBC Scorpions 7-1 in the opener. In yet another reminder as to how close the teams are talent-wise, in consolation play, the RBC Falcons edged the first place RBC Cobras 2-1 thanks to a power play winner from Ethan Philpott (assisted by Ethan Coady). Elsewhere, the Luke Dunn (two goals) and the RBC Hawks surprised the second-place Wolverines 5-5. In Peewee B, the Warriors and Eagles final started and the Eagles quickly got down to business, winning 2-1 and 5-2 to move within a victory of claiming the Fisher Family Championship Trophy in the best of five series. On the consolation side, Renegades and Breakers advanced to the Bronze Medal round while the League season for Celtics and Blades came to an end. In Bantam A, the gold medal will not be easily earned by either team. The RBC Generals claimed game 1 by a 4-3 score on a winning power play goal from Lucas Noble in the third period. Mitch Gladney of the Generals notched a pair of goals in the contest, while Steven Abbott did likewise for the Crushers. In game 2 the RBC Crushers replied with a 2-0 shut-out led by goalie Caleb Rossiter and goal scorers Jordan Winter and Abbott. In consolation play, the RBC Thrashers were the ones with the armor as they clobbered the RBC Gladiators 6-1. Patrick Hurley was in fine form in that game with two goals and four points on the evening. Teammate Jordan Button also scored twice. Guardians won 3-1 over the RBC Warriors in the other match-up. The St. John芒鈧劉s Caps moved to within a victory of the Bantam B title with a pair of wins (5-3 and 3-1) over the Southern Shore Breakers. The Bronze Medal will feature the Blades and Celtics in a best of three series. Stay Calm and Cheer Them On! TP

Play-off Week 3: Lots of Action in All Directions!

Sportscraft Stars of the Week is Back!

Sportscraft Stars of the Week Begins Next Week!