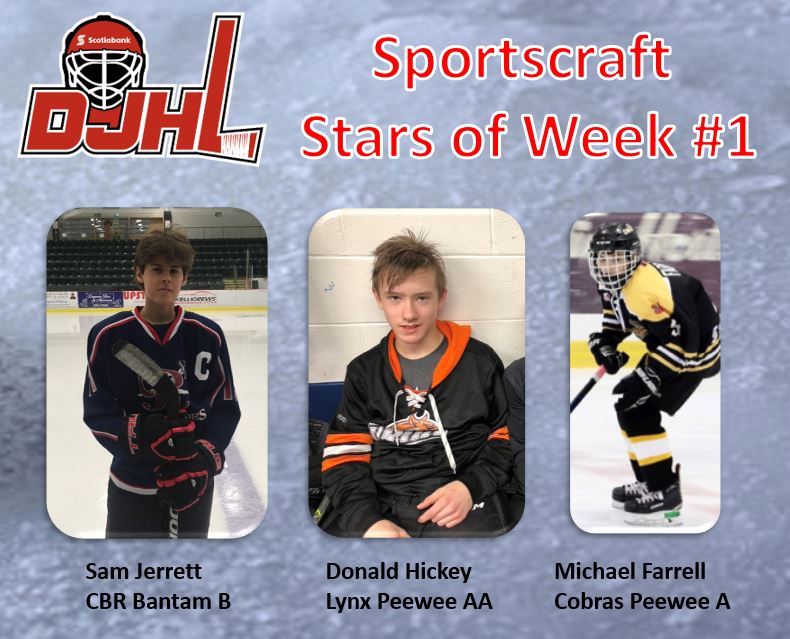 Week 1 of Scotiabank DJHL play-off action kicked off for teams in six of our twelve divisions. Quickly, some players step up their games with help from their linemates. Here are the Sportscraft Stars of Week #1:
First Star goes to forward Sam Jerrett of the CBR Bantam B Renegades. Sam scored two goals in game two of the opening round total goal series against the Avalon Celtics on the way to a 2-0 victory and a 3-1 aggregate series win. Besides his snipes to the top shelf on the short side, Sam's strong two-way play stood out, especially on the back-check.
Second Star goes to Donald Hickey of the BNS Lynx. The Peewee AA goalie shut down the first place BNS Wolverines 2-0 in their semi-final opener with lots of saves from in close. Hickey and the fourth-place quickly proved that in the play-offs, especially in the pooled divisions, any team can win.
Third Star goes to Michael Farrell of the Cobras. The skilled forward notched a pair of goals as his team upset the first-place BNS Hawks 4-3 in opening semi-final action at Twin Rinks on Saturday night.
Winners can pick up their Sportscraft gift certificates at the store on Ropewalk Lane. Congrats!