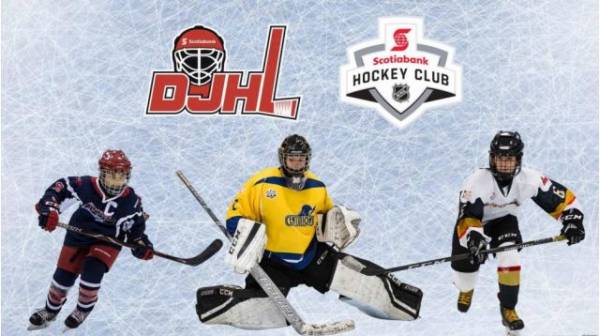 Tuesday night at Twin Rinks, the DJ Pooled Hockey Program launched into action for the season. The players fired 17 goals over two U13 AA games to celebrate. While positional play may have lacked at times on the night, individual performances were memorable.

The Scorpions displayed superb firepower in the night opener versus the Falcons, racking up a decisive 6-1 victory. Led by a three-point effort from Ethan Jones, the Red Army drove hit to the net all night. Their tenacity was rewarded with a three goal first half. Scorpions maintained an edge in play into the second half. Its Combden-Lye Wall on the goal line was rock solid until a late goal from Ethan Fardy, with help from Gavin Barrington, denied the tandem a shut-out.

Scorpions other goal scorers were Brandon Philpott, Reed Chafe, Griffen Gallant, and Ben Power. Gallant’s goal was the highlight of the match, deking two D before doing likewise on the Falcons cager.

In the second contest, rookie Quinn Norman responded in style to the opportunity to play up front instead of another night on the blueline. A natural hat trick later from Norman found the Cobras ahead 3-0 early. Once the Hawks found their wings, it was 3-3 at halftime on a pair of goals from Jack Warren and a snipe from Charlie Dawe.

The Hawks carried their momentum into the second with JD Trainor and Landon Baird finding the twine. Rookie Adam Gardner tallied for the Falcons to keep it close, but a third tally from Warren sealed the deal.

Things may be new and different in the rink these days, but it’s still the same old game. On Tuesday night at Twin Rinks, everyone was glad to be there.

We Make it to the Finish Line!