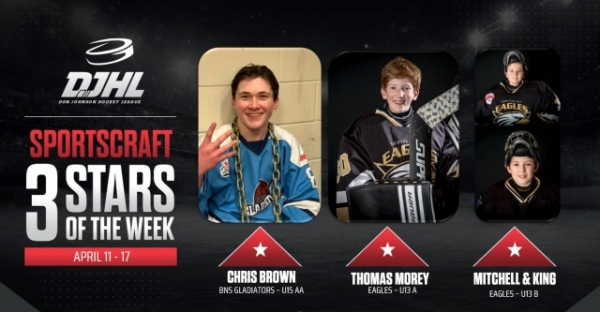 Week 3 of the Scotiabank DJHL play-offs featured exciting action once again. This week goalies grabbed a lot of the spotlight, along with one outstanding offensive performance from a U15 forward.  Our Sportscraft Stars of the Week salute them.

First Sportscraft Star goes to Chris Browne, forward with BNS U15 AA Gladiators. Chris was a scoring machine in Game 1 of his team’s semi-final against the second place BNS Privateers. He tallied four times in his team’s buzzer beater victory over the Privateers. (Ty Peddigrew scored with 2.8 seconds to play to give the Gladiators the win.) Chris’s five-point night was rewarded with his team’s Player of the Game on the night.

Second Sportscraft Star goes to Thomas Morey, goaltender for NE U13 B Eagles. Thomas played a key role for his team, tending net for both Eagles win on their way to the title over the Paradise Warriors. Nicknamed “Tomcats,” his cool demeanor and steady play between the pipes did not go unnoticed by his coaches.

Third Sportscraft Star is presented to the goalie tandem of Ian Mitchell and Jacob King of the Eagles U13 A squad. Their coaches were impressed by Mitchell and King this past week and give them both high marks for their spectacular play in their semi-final series win against a strong Warriors team. These two will be glad to share the prize.